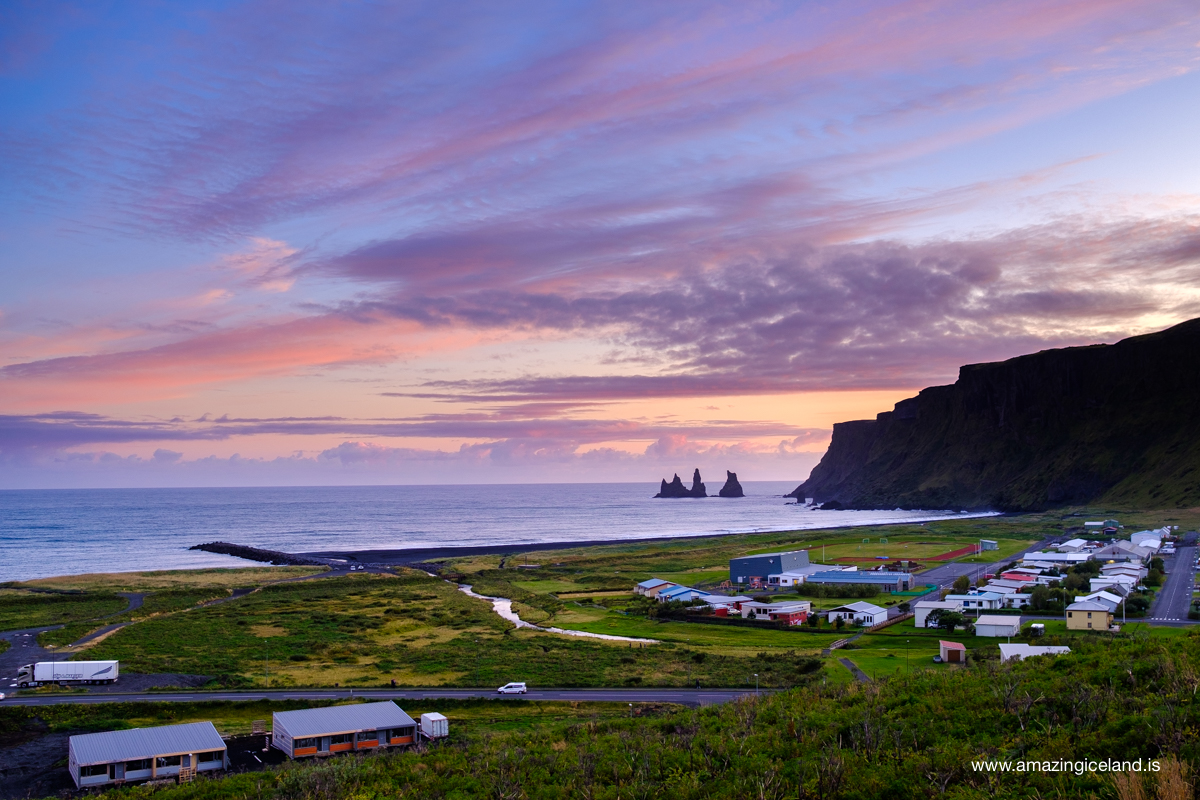 Bordered by the glacial river Jökulsá to the west and the river Blautakvísl to the east Vik is the only seaside settlement in Iceland left without a harbour due to the nature of the coastline extended and formed by frequent eruption in the subglacial volcano Katla that sits under Mýrdalsjökull, the forth largest glacier in Iceland (700 km2) and marks the north borders of Vík.

Vík í Mýrdal or just Vík as the locals call it is a remote seafront village in south Iceland and is the southernmost village on the Icelandic mainland, located 186 kilometres (110 miles) from the capital Reykjavík. Vík has been a trading post since 1887 and is today one of the fastest growing communities in Iceland as it is the central town in the Katla UNESCO GLOBAL Geopark and has developed as the main service center to nearby farmers and travellers passing through on their way along highway one to the east or ending their day trip on the south coast. On January 1, 2016 the population was 318.

Bordered by the glacial river Jökulsá to the west and the river Blautakvísl to the east Vik is the only seaside settlement in Iceland left without a harbour due to the nature of the coastline extended and formed by frequent eruption in the subglacial volcano Katla that sits under Mýrdalsjökull, the forth largest glacier in Iceland (700 km2) and marks the north borders of Vík. The lack of harbour did not stop inhabitants to go fishing and until 1939 when the road to vik opened most of its products came with ship or by horse.

The natural surroundings in Vik are quite beautiful with black sand beach filled with birdlife, Mt Reynisfjall to the west, Hjörleifshöfði to the east and the glacier Mýrdalsjökull on top of mountain area that is perfect for exploration with many lovely walking and hiking paths just as in Vik and the surroundings. Particularly of note are the Reynisdrangar sea-stacks, said to be two trolls frozen in the light of the morning sun as they tried to pull a ship into shore. The climate is relatively mild. The birdlife is diverse and there are good conditions for bird watching.

There is much to see and explore in the vicinity  of Vík. Just east of the outskirts of the village lies one of Europe’s biggest artic tern breeding grounds. A short hike within the close vicinity of Vik is sure to satisfy all serious nature lovers and birds watchers.

Hjörleifshöfði (Tuff island) (221 m) is to the southwest of Mýrdalssandur. This was a coastal headland until the 14th century, when the shore began to advance as deposits piled up after glacial floods from Mt. Katla. Hjörleifshöfði (Hjörleifur’s Headland) is named after first settler Ingólfur Amarson’s foster-brother, who was killed by his slaves during their first year in Iceland, The island is the product of a submarine eruption during an Ice Age interglacial and was inhabited up until the 20th century.

The black sand beach of Reynisfjara is in Reynishverfi, west of Mt. Reynisfjall, considered one of the world’s most beautiful non-tropical beaches, it boasts incredible geology and is undoubtedly one of the most majestic beaches in Iceland. In 1991, the US journal Islands Magazine counted this beach as one of the ten most beautiful beaches on Earth.

Reynisfjara black sand beach is also home to a beautiful columnar basalt cave that is stated to have inspired then state architect Guðjón Samúelsson when he designed the church Hallgrimskirkja. Samúelsson designed the lighthouse in the island Dyrhólaey that can be seen to the west when in black sand beach. Dyrhólaey peninsula has a large rock arch that may have given name to the island as it translates to doorway island.

North of Black beach is the church Reyniskirkja, a wooden church dating to 1929.

Dyrhólaey is a sheer promontory (120 m) west of Reynishverfi that rises towards the sea and is the southernmost point of the mainland, as well as home to rich birdlife and filled with puffins in the summer time. A narrow point called Tóin juts out into the sea, with an opening that is large enough to be passable by boats formes an impressive natural arch. It is believed that Dyrhólaey formed during a later interglacial period as a result of a submarine eruption, similar to the one that created the island of Surtsey in 1963. Dýrhólaey has been a protected area since 1978.

To the north west you can see the glacier Eyjafjallajökull on a clear day. Eyjafjallajökull famously disrupted European air travel in April 2010 stranding up to 100.000 passengers world wide when airports in europe got closed because of the heavy ash cloud came when an eruption started under the glacier. Out to sea in especially good weather, the Westman Islands can also be seen on the horizon.

Further north you can see the forth largest glacier in Iceland Mýrdalsjökull sitting on top of the mountain range. Mýrdalsjökull Glacier is 595 km2 in area and 1493 m tall. Its glacial tongues creep down to the lowlands, the most prominent being the glacier Sólheimajökull.

The volcano Katla, an active central volcano with a caldera up to 10 km in diameter, is found under the southeastern side of the glacier. On average, Katla has erupted at intervals of 40 – 80 years, melting the glacial cap and causing catastrophic floods that sweep glacial debris across the entire sands. 16 Katla eruptions have been recorded in historical times, but there have probably been 20 in all. Katla’s last noticeable eruption was probably in 1918, that one did not cause significant damage, but a glacial flooding in 2011 points to Katla erupting with out reaching through the glacier. The flooding took out the bridge on highway 1 east of Vík.

As Katla has not erupted since 1918, this longer than typical dormant period celebrating  100 years on oct 12 2018,  has led to speculation that an eruption may occur sooner rather than later. An eruption of Katla could be as big as ten times that of the volcano Eyjafjallajökull and melt enough ice to trigger an enormous flash flood, potentially large enough to obliterate the entire town. The town’s church, located high on a hill, is believed to be the only building that would survive such a flood. Thus, the people of Vík practice periodic drills and are trained to rush to the church at the first sign of an eruption.

Because it lies on the windward side of the Gulf Stream, Vík í Mýrdal is the wettest coastal town in Iceland, with an annual rainfall of 2,250 millimetres (89 in), which is three times more than Reykjavík. Vík í Mýrdal is also the warmest place in Iceland with an annual average temperature of 5.3 °C (41.5 °F). Like most of coastal Iceland, Vík í Mýrdal has a subpolar oceanic climate with cold but not severe winters and cool, short summers.

Its winters are among the warmest in Iceland, with an average winter day having a daytime high around 4 °C (39 °F).

The route to Vík from Reykjavík is beautiful with two of the country’s most famous waterfalls, Skógafoss and Seljalandsfoss, in between the two destinations; the former has awe-inspiring power, whereas the latter has a hiking path behind it.

Further to the east as you travel the South Coast, through the Skeiðarásandur black-sand-plains you reach the town of Kirkjubæjarklaustur and then Vatnajökull National Park in Skaftafell. The beautiful south-east region is often the final destination of those passing through Vík, as it is home to Vatnajökull the largest glacier in Europe, the Skaftafell reserve with in Vatnajokull national park, and Jökulsárlón Glacier Lagoon with its floating icebergs.

It’s important to use caution when visiting this area, particularly at high tide. There is no landmass between here and Antarctica and the Atlantic rollers can attack with full force. Though the beaches make for a lovely walk, particularly for those staying in Vík overnight, as they can be enjoyed under the midnight sun or northern lights, they have their dangers. Sneaker waves can be notorious here, so visitors should stay far away from the water’s edge, and never go for a swim. Lives have been lost here in the resent years.