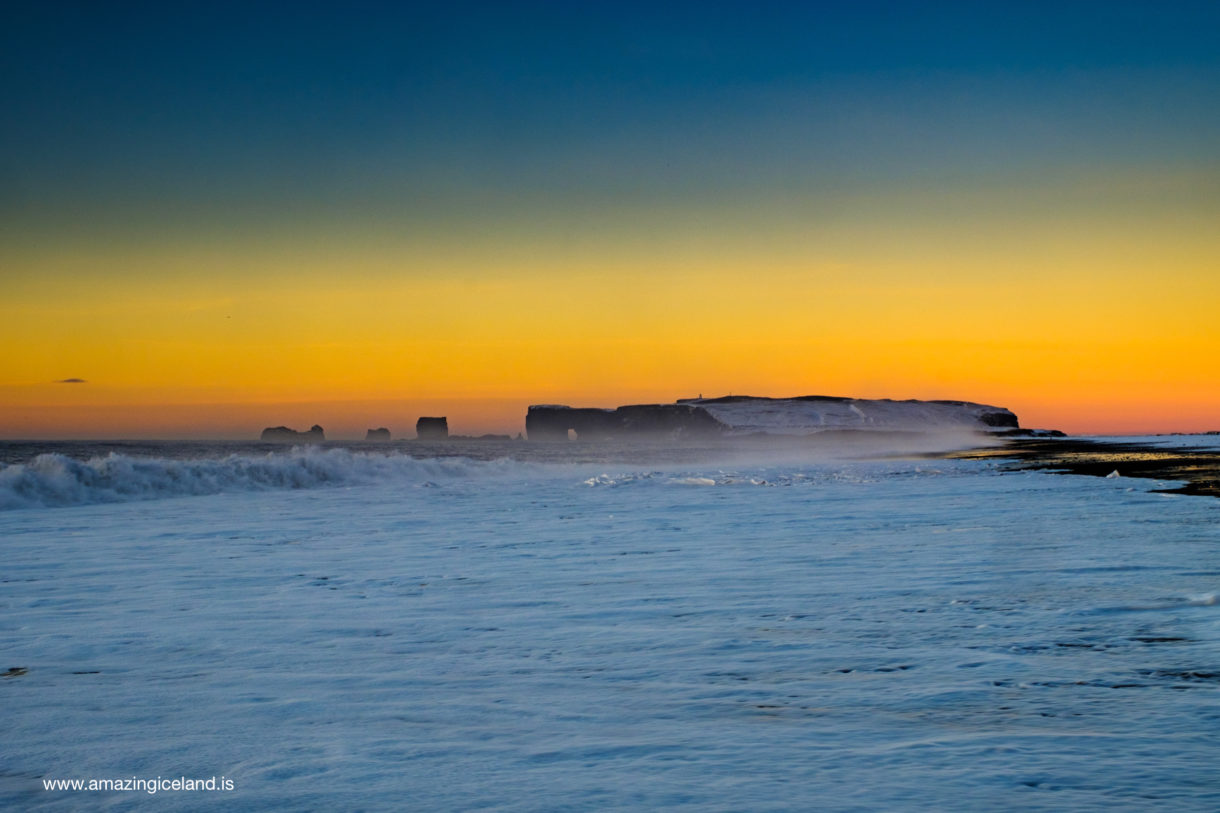 A place of wild and dramatic beauty

At Iceland’s southernmost point, the black sand beach at Reynisfjara is one of the most beautiful beaches in Iceland.  With its enormous basalt stacks, roaring Atlantic waves, flying puffins and stunning panoramas, Reynisfjara is widely considered to be the most beautiful example of Iceland’s black sand beaches and was in 1991 voted by National Geography as one of the top 10 non-tropical beaches to visit on the planet. The raw black lava sand landscape derives from previous glacial outbursts of  the now dormant volcano Katla.

This is a place of wild and dramatic beauty where the roaring waves of the Atlantic Ocean power ashore with tremendous force. No wonder why Game of thrones, Star wars, Justin Bieber and numerous stars and adverts have chosen to film on this location. The place is filled with magic.

Where is Reynisfjara Beach Located?

Reynisfjara Beach is located on the south coast of Iceland 10 km away from the town of Vík and 180 km from Reykjavík.

Why is the Sand at Reynisfjara Black?

The simple explanation for this is that the tremendous power of the Atlantic ocean hammers on the lava rocks at the beach eroding them into ever smaller particles that make up for the sand at Black beach. Thus the black sand is made up of tiny tiny rocks.

There are at least 25 different volcanic rock types found in Iceland with basalt as the best known or most common but types on the island include olivine, gabbro, rhyolite and tholeiite. Reynisfjara is formed from heavily eroded volcanic rocks , which are black (or obsidian) to begin with as they have been formed from cooled lava which turns black as it cools and hardens.

The coastline from Vík í Mýrdal and east to Hjörleifshöfði is prone to rapid changes due to eruptions in the notorious Volcano Katla every fee decades. These eruptions bring with them large amount of sediments in glacial flooding called Jökulhlaup,  that can contain millions of cubic meters of material which is then moved along the coast by waves and currents. In the 1918 eruption the coast around Hjörleifshöfði was moved forward by a huge jökulhlaup but the shift and movement of the material moved mostly to the west where it was added along the coast nearby Vík town and had also effect on Reynisfjara – Black beach making it today the south most point of Iceland. Erosion is still ongoing and the coastline in Vík is today back to nearly the same place as it was in 1918, before the eruption in Katla.

What is there beside black sand beach?

Reynisfjara features an amazing cliff of regular basalt columns resembling a rocky step pyramid called Hálsanef,  thought to have given an inspiration to the state architect Guðjón Samúelsson when he designed the big church Hallgrímskirkja in Reykjavík as well as when he designed the national theatre of Iceland. Hálsanef is at the roots of the mountain Reynisfjall (340m) with one of the steepest mountain roads to be found in Icleand. Just around the corner you will find the cave Hálsanefshellir  and to the east from the cave you will see the basalt columns Reynisdrangar out at see that in folk tails are thought to be trolls. To the southwest you will find  Dyrholaey (Cape of the Doors), a natural rock bridge formation that is perhaps the most recognisable landmark in South Iceland. In the summer you can drive to the top of it and walk to the old lighthouse for fantastic views of the areas rich birdlife, including puffins. To the north you will have a view to the beautiful glacier Mýrdalsjökull.

According to one local Icelandic folklore, these large basalt columns were once trolls engaged in trying to pull ships from the ocean. However, as bad luck would have it, the dawn quickly arose, turning the trolls into solid stone.

Another legend tells of a husband whose wife was kidnapped and killed by two trolls. The man followed the trolls down to Reynisfjara where he froze them, ensuring that they would never kill again.

The largest of the Reynisdrangar Columns is the one with the three peaks which is called Langsamur and looks quite a bit like a ship when viewed at a distance.

Attached to Langsamur is Landdrangur, the second largest stack. Landdrangur is the column which is closest to the beach. The third column is the smallest, and is known as Skessudrangur or Háidrangur, this is ironic as both names derive from the Icelandic words enormous and tall.

In truth, these naturally occurring columns were connected to Reynisfjall mountain range during the last ice age, but after lengthy periods of harsh weathering, they have become eroded to the point where they are no longer visibly connected and look as though they arose up out of the ocean on their own.

The sea stacks themselves are home to thousands of nesting seabirds. Species that can be found here include Puffins, Fulmars and Guillemots, making it a must-see location for all birdwatchers out there.

Weather and erosion continues to reshape the Reynisdrangar, the cave and Black beach on a daily basis, the ever changing light and contrast in weather and the  elements make sure that no two visits to the area will produce the exact same sights.

Skaftafell National Park is 150 km away to the east.  On the way from Reykjavík you will drive through the towns of Selfoss, Hveragerði, Hella and Hvolsvöllur and find beautiful sites like Seljalandsfoss Waterfall  , Skógafoss waterfall, Sólheimajökull Glacier and Dyrhólaey island.

The restaurant was built in 2014 and is an architectural beauty where the building blends into the terrain as rocks from the beach were used for building material in the walls. The coffee house offers; hot soup, freshly made cakes and sandwiches, local discs such as waffles with local ice cream, soft drinks, coffee and tea. The restaurant offers traditional Icelandic food like lamb, beef and fish and free wifi for guests.

Iceland is a very popular filming location for everything from Hollywood movies to big-budget TV shows, and Reynisfjara Beach is no exception in this regard.

Game of Thrones – East watch, where the Men of the Night’s Watch are stationed. Noah (2014) – The Biblical epic directed by Darren Aronofsky and starring Russell Crowe Star Trek: Into Darkness (2013) – The second instalment in J.J. Abrams’ sci-fi series, featuring Chris Pine and Benedict Cumberbatch. Rogue One: A Star Wars Story – A prequel to the original Star Wars film and a much grittier take on the series’ lore.

Reynisfjara Beach is a Black Sand Beach Unlike Any Other enjoy it but stay safe at the same time.

Safety Tips for Visiting Reynisfjara black Beach The unpredictable waves of Reynisfjara Black beach are extremely strong, powerful and often push a lot further up the beach than one might expect, so stand too close. When they pull back away from the beach, their force is even stronger, and they are well capable of dragging unfortunate people away with them. Because of their strength it is advisable to stay away from the waves at all times and keep a close eye on them. Never turn your back at them because they could sneak up on you. Don’t let children wander off on the beach. Aside from these sudden and dramatic shifts in tide (known as “sneaker waves”), the currents off the shore are infamous for their strength and ability to drag helpless people out into the freezing cold open ocean. A number of fatal accidents have occurred at Reynisfjara, the last of which occurred in January 2017
Previous
Next
The coastline from Vík í Mýrdal and east to Hjörleifshöfði is prone to rapid changes due to eruptions in the notorious Volcano Katla every fee decades. These eruptions bring with them large amount of sediments in glacial flooding called Jökulhlaup,  that can contain millions of cubic meters of material which is then moved along the coast by waves and currents.