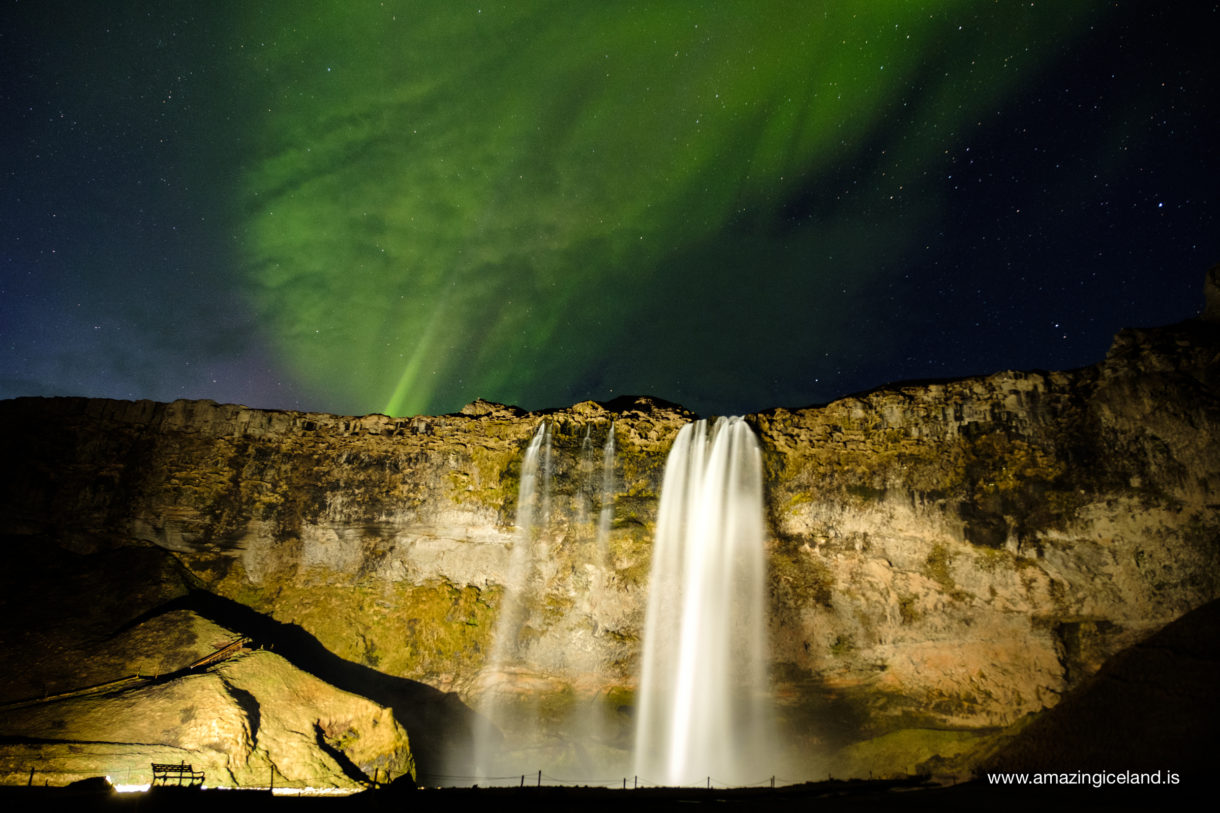 Walk behind the waterfall

The waterfall Seljalandsfoss on the south coast of Iceland is probably one of Icelands best known waterfalls and only the great Gullfoss waterfall is possibly more frequently visited. This is because the waterfall is one of only few waterfalls in iceland that you can walk behind.

The waterfall Seljalandsfoss on the south coast of Iceland is probably one of Icelands best known waterfalls and only the great Gullfoss waterfall is possibly more frequently visited. This is because the waterfall is one of only few waterfalls in iceland that you can walk behind.

Walk behind the waterfall

The waterfall drops 60 m (197 ft) and is part of the Seljalands River that has its origin in the volcano glacier Eyjafjallajökull. One of its main attraction is the fact that you can walk behind the waterfall in summertime and get a breathtaking view through the waterfall out to the surroundings.

Is it safe walking behind Seljalandsfoss?

It is thought to be safe, even though the path is rocky and muddy and can be a bit slippery, craving that you have good and sturdy hiking boots when you take the relatively easy walk behind the waterfall. Still this is nature and one should always carefully scout the surrounding before entering a site like Seljalandsfoss.

The weather can have effect both on the paths and on the surrounding landscape. In springtime, especially when the rain has been poring down and the the ground is thawing after winter, some rocks can come rolling down. Occasionally it can happen on other days if the rain has been heavy. This happened in September 2017 when a 100kg rock came flying down from the edge and fell onto the path. Thankfully there where no people hurt in that incident.

On January 15, 1967, the day’s rainfall measured 101 millimeters in Skógar. The water in the rivers escalated to a new hight and the volume and force was such that it damaged the edge of the cliff where Seljalandsfoss falls down. This created a gap that now constrains the flow of the river so that the waterfall is not as widely spread as it used to be.

Can I go behind Seljalandsfoss in winter?

In winter time the path can be closed if the terrain gets too icy and slippery and dangerous to walk behind the waterfall. Icicles hanging from the edge can also pose threats to people so be careful in the area in winter and it is good to bring some crampons to use on icy paths and parking spots.

Next to Seljalandsfoss is an other no less beautiful waterfall called Gljúfrabúi even though some say that it is a wrong name and its real name is Gljúfurfoss. Gljúfrabúi is found with in a beautiful canyon and one has to wade the river Gljúfurá to get into the dome surrounding it.

Seljalandsfoss is located in the South Region in Iceland right by Route 1 to the left on road Road 249 that leads to the beautiful valley of Þórsmörk, only 120 km from Reykjavík, and is almost a mandatory stop on all south coast tours and if you are driving on the south coast you can hardly miss it as it is clearly seen from highway 1. Even in winter you cant miss it as it is lit up at the darkest hours of the day.

Good gear to have when going behind Seljalandsfoss.

Do not forget to wear your rain gear and good sturdy shoes or hiking boots when you take the marvellous trip behind Seljalandsfoss.

Protect your camera from the mist and spray with waterproof camera raincoat and bring a flash gun or a torch light for brightening up your photography. Cloth to wipe the mist of your camera lens is also good and a tripod can come in handy. Wide angle lens is a must if you really want the waterfall and its surroundings in all its glory.

Hiking little bit up to the hillsides is some thing that you can do in winter but please stay on the paths in summer so that you do not ruin the landscape around it with criss crossing paths. Shutter speed 1/15 of a sec or lower will give you a silky look of the water flowing.