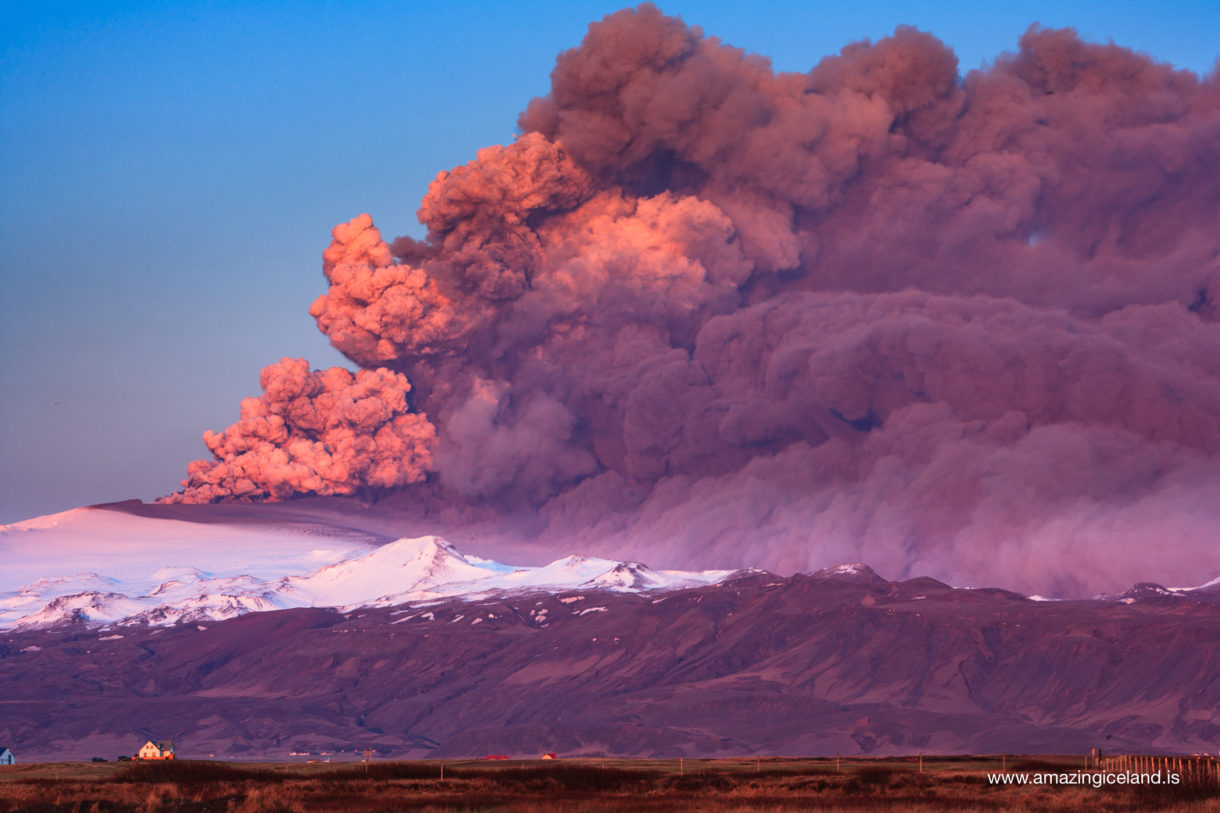 Beauty and the beast

Eyjafjallajokull is located north of Skogar, and to the west of Myrdalsjokull glacier and the massive volcano there; Katla, at the borders of the South Icelandic highlands. Two glacier outlets ( crawling glaciers ) fall from Eyjafjallajökull to the north, down to the plain.The front one (western) Gígjökull or Falljökull and the inner one is called Steinsholtsjökul

The magnificent strato volcano Eyjafjallajokull, is probably best known today for stopping air traffic in Europe in 2010 leaving passengers stranded and as many as 107.00 flights canceled world wide when the glacier opened up on 14th of April that year, sending cloud of ash some 9.0 km ( 30.000 f ) up in the air. In the written history of Iceland it has erupted 4 times in the years 920, 1612, 1821-1823 and 2010.

Eyjafjallajokull consists of a strata volcano, a conical volcano built by many layers of hardened lava, tephra, pumice and volcanic ash, which is completely covered by an ice cap and is about 100 km² (39 sq mi) and therefore the sixth largest glacier and among the highest ones in Iceland or 1,651 metres (5,417 ft) high. The diameter of its highest crater is around 3-4 km2 wide and the rim has several peaks. It is crowned by a small caldera and an icecap that reaches down to 1000m above sea level.

Eyjafjallajokull is located north of Skogar, and to the west of Myrdalsjokull glacier and the massive volcano there; Katla, at the borders of the South Icelandic highlands. Two glacier outlets ( crawling glaciers ) fall from Eyjafjallajökull to the north, down to the plain.The front one (western) Gígjökull or Falljökull and the inner one is called Steinsholtsjökul

Compared to its neighbour volcano Katla, which it is thought to be related to, the Eyjafjallajokull volcano has been relatively quiet in post glacial time even though it has been active for at least 800.000 years and sits on more than 25km-thick crust. It consists of at least six glacial and six interglacial volcanic sequences. The former sequence compromises subglacial volcanic formations, such as pillow lavas, kubbaberg breccia, hydroclastic tuffs and intercalated tillites.

The latter sequence is typically composed of a stack of subaerial lava flows indicating emplacement during ice-free periods. Good examples of these sequences are exposed in the sea cliffs on the south side.

Eyjafjallajökull’s eruption history is quite well known after Iceland’s settlement period, but less so for the previous thousands of years. Eyjafjallajökull has erupted four times since Iceland was settled, first in the 110th century then in the 17th century, early in the 19th century and finally the most resent eruption in 2010.

The 2010 eruptions in Eyjafjallajökull.

The first of seismic swarms took place beneath the volcano in May 1994 lasting for almost a month. In July 1999 an other seismic swarm was detected and in line with the former one it lasted for about a month. Almost ten years passed until the next unrest started.

This time in May 2009 when swarm of earthquakes was accompanied by significant inflation of the outer flanks of the volcano. This time it paused for only 6 months and in December seismicity as well as inflation resumed, increasing steadily in magnitude and intensity over the following three months. On 18th of march it was evident that Eyjafjallajokull was about to erupt and on 20th of March a 400 m long fissure opened up on the northeast flanks of Eyjafjallajökull, just above the mountain pass Fimmvörðuháls, a saddle between Mýrdalsjökull and Eyjafjallajökull, creating the volcanic craters Magni and Modi. This eruption lasted until the 12th of April 2010 and produced 0.026km3 lava and tephra.

Second phase of the eruption

It was the second phase of the eruption that started on April 14th that created the huge ash cloud that rose about 9 km into the skies stopping air traffic and stranding passengers. This time the magma of intermediate composition broke out from the vents at the summit of Eyjafjallajokull and through 250m of ice. Meltwater cascaded down the outlet glacier Gigjokull and filled the river Markarfljot so that it was completely flooded leaving the authorities forced to rupture the road in order to save the bridge on main highway 1.

Early on the appearance of the eruption plume changed in an instance and became dark as the vents where vigorously spewing tephra into the atmosphere reaching altitudes of 9 km. For the next days or until the 18th of April, explosive periods of two to three hours where featured in the eruption but the intensity dropped significantly on the 18th of April and from 17 of May the activity dwindled steadily until it stopped on 22nd of May

The ejected tephra measured around 300 million cubic meters of which 50% was very fine ash. Enough ash to cover greater London with 20cm layer of ash.

The eruption was officially declared to be over in October 2010, as the snow on the glacier had ceased to melt.

Because of the volcanos eruptive history, geologists have been watchful of the mountain for some time. It has long been thought that a connection might exist between activity in Eyjafjallajökull and the volcano Katla beneath the glacier Mýrdalsjökull. Since settlement times it seams that Katla has erupted at similar times to Eyjafjallajökull, but no connection has been made between the two of them.

It could be a coincidence, but central volcanos frequently respond to the movements and changes in other volcanic systems. Future volcanic developments remain unclear. The area is still highly active and can be quite unpredictable. It continues, however, to be closely monitored by The Icelandic Meterological Office.

Previous
Next
At the roots of Eyjafjallajökull you will find two waterfalls that are not far from Highway 1 and with relatively easy access. The better known of the two is Seljalandsfoss. The 60 m high waterfall that gets its fame from the fact that you can walk behind it. Not far from Seljalandsfoss is the lesser known but magnificent Gljufrabúi or Gljúfurfoss. A waterfall you can get really close to if you are prepared to get wet as you have to wade through river through a canyon to get to the dome where the waterfall hits the ground.
Eyjafjallajokull consists of a strata volcano, a conical volcano built by many layers of hardened lava, tephra, pumice and volcanic ash, which is completely covered by an ice cap and is about 100 km² (39 sq mi) and therefore the sixth largest glacier and among the highest ones in Iceland or 1,651 metres (5,417 ft) high.
Recommended reading: