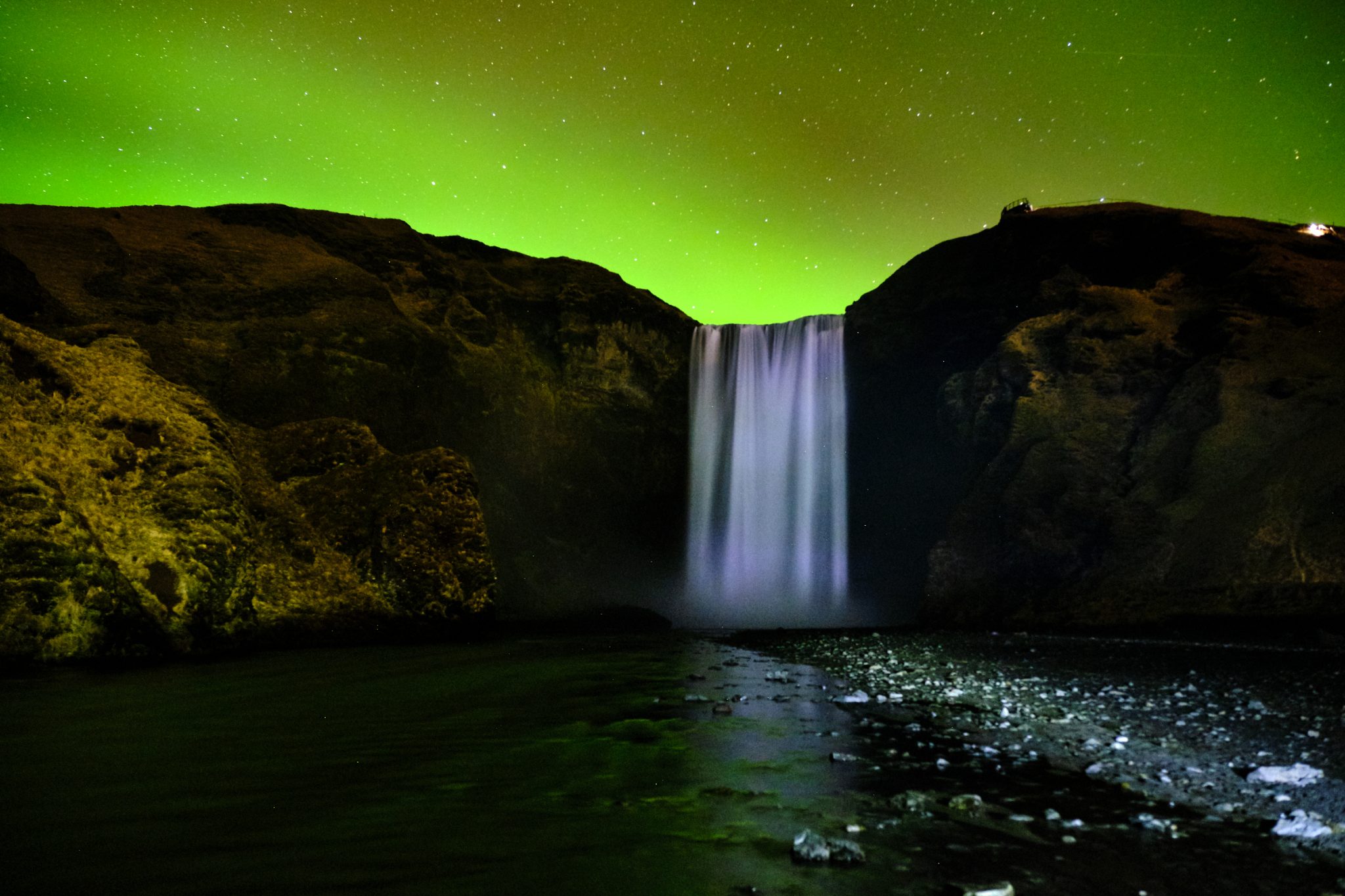 Skogafoss waterfall situated on the Skoga River in the south of Iceland, is one of the biggest waterfalls in the country with a width of 25 metres (82 feet) and a drop of 62 m (203 ft) of the cliffs of the former coastline. It is the last in row of waterfalls that stem from the passage of Fimvorduhals that erupted in march 2010.

Skogafoss waterfall situated on the Skógá River in the south of Iceland, is one of the biggest waterfalls in the country with a width of 25 metres (82 feet) and a drop of 62 m (203 ft) of the cliffs of the former coastline. It is the last in row of waterfalls in the river Skógá that stem from the passage of Fimvorduhals (Fimvörðuháls) situated between the glaciers Eyjafjallajokull (Eyjajallajökull) and Myrdalsjokul (Mýrdalsjökull). It has fast turned into one of the more famous sites in Iceland as it is both easily accessible and has been made famous in films like The secret life of Walter Mitty.

Easy access to Skogafoss You do not have to undertake heavy trekking to enjoy the Skógafoss waterfall as it is only two kilometres from the main highway and the parking is just few hundred meters away. Skógafoss is thus accessible by everybody all year round. From here runs a 22 km long trek along the river Skógá up Skógaheiði moors over the Fimmvörðuháls pass between the Eyjafjallajökull and Mýrdalsjökull glaciers to the beautiful mountain oasis of Thorsmork (Þórsmörk or valley of Thor), considered by many Icelanders to be the most beautiful place on earth. Up on hiking the trail you will now be hiking over one of the younger lava fields of Iceland as the lava from the 2010 Fimmvorduhals eruption ran over part of the trail from the newly created volcanic craters Magni and Móði. The 22 kilometers long (14 mi) trail is usually done as a day hike with a night in Thorsmork (Þórsmörk) after but can also be done in two parts with a night at the top of Fimvorduhals where there is a hut. Some like to do it the other way around from Thorsmork (Þórsmörk) up to the pass and back down in a day, this version has been named the Þórsmörk Volcano Hike.
Hike the stairs of Skogafoss waterfal It is well worth while to hike the first part of the trek, the one that starts with the stairs and its 428 steps that mark the beginning of the trail, and up to the observation platform above Skógafoss, for a magnificent overview of the waterfall and the south coast area of Sólheimasandur and the Atlantic Ocean. The river below the falls holds a large salmon and char population and fisherman are seen here fishing July – October. With Iceland constantly rising from the ocean (about 14mm a year) the coastline from Skógar has receded seaward and is now at a distance of about 5 kilometres (3.1 miles). The former sea cliffs marking the south coast area remain parallel to the coast over hundreds of kilometres, creating together with the nearby mountains a clear border between the coastal lowlands and the Highlands of Iceland. The 22 waterfalls hike Only few steps away from the platform is the second lowest waterfall of the river. This trek is the start of one of Icelands most popular mountain hike between Skogar and Landmannalaugar where the part between Thorsmork (Þórsmörk) and Landmannalaugar has been named Laugarvegurinn. This is not named after the most popular and best known shopping street in Reykjavik but a common Icelandic naming tradition as it is the road or path to Laugar (baths) fully named Landmannalaugar. When hiking the Skógaheiði moors, you will be amazed over the multitude and diversity of waterfalls and rapids adorning the Skógá River. In total there are 22 waterfalls fighting for the title of the most beautiful waterfall of the river. The home of the rainbow You do not have to hike up to the top to enjoy the beauty of Skogafoss, that can as well, and in fact should be done from the ground also. You can walk fairly close up to this majestic waterfall and enjoy its birdlife, silver spray and colour painting. Due to the amount of spray the waterfall consistently produces, it is not uncommon to see a single or double rainbow at the waterfall. The rainbows differ in size and shape and the deeper in the cove and closer you get to the roots of the waterfall the more likely you are to see a rainbow. For this reason the waterfall has been nicknamed the rainbow waterfall.

Skógar, the area of Skogafoss has the lovely Skógar Museum. The museum is open June, July, and August from 9 am to 6 pm and the other months from 10 am to 5 pm.

The Skógar Museum is split into 3 different parts. There is the Open Air Museum, The Folk Museum and the Technical Museum.

Skogar, the Skogafoss area is a lovely and beautiful area to stay the night while traveling around the South Coast of Iceland. Your options for accommodation is divergent. In this it is each to his own. Some people like to camp in the camping area at Skógafoss, others like to rent a cabin near by and others like to stay at the hotel in Skógar. Camping in Iceland in winter is only for extremely well equipped and experiences people as weather can change rapidly.

Visit Skógafoss early or late if you want to avoid crowds. In summertime with light all year round visiting in the middle of the night, between 2- 4 is great.  If you are looking to have Skógafoss Waterfall all to yourself you are going to want to visit first thing in the morning or right around sunset. You can visit Skogafoss Waterfall after dark if you want to get some great astrophotography or watch the Northern Lights dance over the waterfall!

A good sturdy tripod is necessary to get the most out of the flow of the water and her you can play around with both wide angel lens as well as using telephoto or zoom lens to get closer to certain areas as well as getting the feeling for the power of the water volume flowing down. Using slow shutter speed and graduate filters can add to the play with water and the surroundings.
Previous
Next

Vikings (2017), in the 5th season there is a scene where Floki, (Hrafna-Flóki or Raven Flóki) is seen staring at the alluring waterfall Skógafoss.

The waterfall was the setting for Sólstafir’s 2012 music video Fjara off their album Svartir Sandar.

The waterfall was used as one of the locations of song Gerua, in 2015 Bollywood movie Dilwale featuring Shahrukh Khan and Kajol.

Justin Bieber – I’ll Show You (2015) in the video Bieber is seen walking, running, swimming and skateboarding around famous location on the South Coast in Iceland, including  Seljalandsfoss, the DC3 plane wreck at Sólheimasandur Black Sand Beach, Dyrholaey Cape, Fjadrargljufur Canyon, Jokulsarlon Glacier Lagoon and of course our Skogafoss waterfall.

The Secret Life of Walter Mitty – among many location in Icleand, Skógafoss was one of them

Thor: The Dark World (2013) this Marvel Blockbuster was filmed in a few locations in Iceland, Skógafoss being one of them.

Land Ho! (2014) is a film about two ex brother-in-laws who travel to Iceland and visit all sorts of beautiful places in Iceland including Skógar.