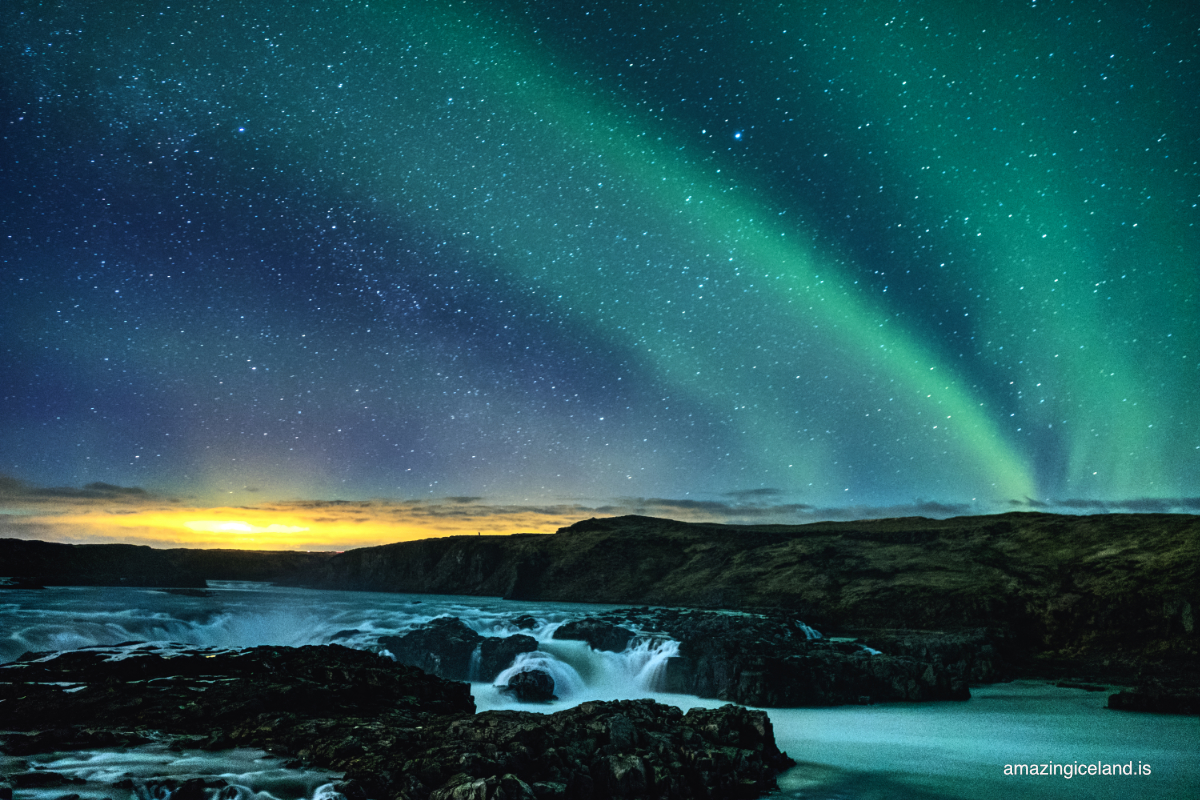 Þjórsá is Iceland's longest river, 230 km, and the second most voluminous river. Urriðafoss on the other hand is the most voluminous waterfall even tough the water volume has been diminished by up to 50% because of the 5 dam built in the river.

Urriðafoss is a waterfall located in the river Þjórsá (Thjorsa) in southwest Iceland. The Þjórsárhraun lava field is the result of on of the greatest lava flow on earth since the beginning of Ice Age. Þjórsá river has cut its path down between the lava and the hills as it descended from the Þjórsárhraun down to the formation below. Þjórsá was a big road obstacle earlier in the day and dangerous to cross. It was first bridged in 1895, and it was second bridge of bigger size in the country after the bridge across Ölfusá river. The bridge over river Þjórsá was rebuilt in 1949.

Urriðafoss is the last waterfall in the river Þjórsá about 1.5 km from highway one and beside a farm with the same name. It is the most voluminous waterfall in the country. Urriðafoss is not a high waterfall, only 6m high, but it is wide and because of this it can almost disappear in wintertime when the ice builds up, some times to 20m height causing the river flows over its banks. In the waterfall this mighty river drops down (360 m3/sec) by the edge of Þjórsárhraun lava field in beautiful and serene surroundings.

Þjórsá and its side rivers are the most powerful water system in Iceland and its sustainably usable power is about 27% of all such energy outlets in Iceland. Þjórsá river gets glacier meltwater from the glaciers Hofsjökull, Tungnafellsjökull and the largest glacier in Europe Vatnajökull. Most part of the fresh water that flows into Þjórsá comes from Lake Þórisvatn and Veiðivötn (fishing lake area.

The Fossafélagið Títan company was given permission in 1927 to build a power plant in Urriðafoss in connection with a railway to Reykjavík from the waterfall. It did not happen but now Landsvirkjun is planning to build hydropower stationson the lower part of Þjórsár river, at Urriðafoss and Núpur.
The proposed Urriðafoss Power Plant is expected to have a capacity of approximately 125 MW and a power-generating capacity of 930 GWh per year. The powerhouse will be underground and a tunnel leading from the powerhouse will open out into Þjórsá river below Urriðafoss waterfall. The waterfall is expected to disappear if the powerhouse is built. Local residents in the area are protesting against the construction in an effort to save Urriðafoss. Hopefully we can view this magnificent area in all it’s glory for a long time.

Salmon travels up Thjórsá, up under the waterfall, and far up above it. It is said that the salmon stock in Þjórsá has a particularly strong and long tail to be able to climb the waterfall. Trout is found in the river and there is also a eel. There is a lot of life to be found in the river, although it does not seem like it at first sight.

Þjórsá is one of the country’s best-delivering salmon fishing rivers. The average fishing in Þjórsá is about 1999 salmon pr year, which is 4.9% of salmon fishing in Iceland during the same period. On average, about 98% are caught in a net but 2% with a rod. It is estimated that about 4000 salmons a year enter the river.

In the affected area of the power plants in Þjórsá, live all of the fish species found in freshwater in Iceland. ie salmon, trout, charr, sticklebacks and eel. Salmon and trout are dominant species in the affected areas of the proposed powerplants.
The proposed building of new power plants in the lower part of Þjórsá ,may have a negative effect on the salmon stock in the river, partly because salmon habitats will decrease and drops in surviving smolts will occur. There is a risk that hatching of salmon and trout would be eliminated in 51% of the measured habitat.

What makes the salmon in Þjórsá special, among other things,  is the fact that large population spawns and grows up in glacial water, which is rather rare in salmon stocks in Iceland and in fact worldwide.