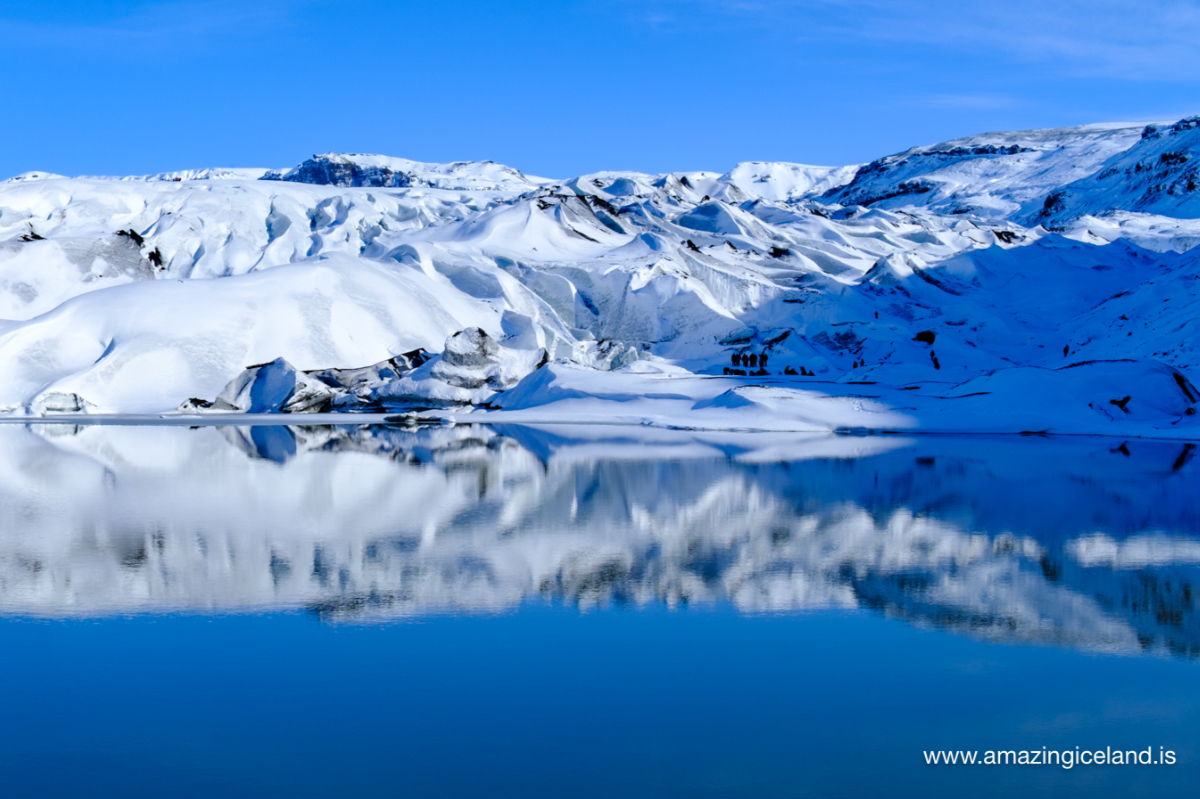 Home to the sun and ice

Solheimajokull glacier is an approximately 11km long and 200m - 300m thick and 46 sqkm outlet glacier, which advances from Myrdalsjokull glacier. Sólheimajökull retreated by 973 meters (0.6 miles) from 2000-2015. In the years 2017 - 2018 the glacier retreated 100m. If the climate continues to warm, there is a possibility that the glaciers will have virtually disappeared in 100 to 200 years. "It is among the highest losses on the Earth," says pioneering glaciologist Helgi Bjornsson

Solheimajokull glacier
Solheimajokull glacier is an approximately 11km long and 200m – 300m thick and 46 sqkm outlet glacier, which advances from Myrdalsjokull glacier, down a one to two km wide valley. Sólheimajökull is called crawling glacier as the glacier crawls from a height of about 1,300 m down to 100 m on the low land. Because of the location and shape of the glacier, it is sensitive to climate change. In the lowlands the climate is warm and humid with average temperatures above 5 °C and precipitation of 1,810 mm per year. Precipitation on Myrdalsjokull glacier, however, is much higher, or up to 7,000 mm per year, and the average temperature is much lower.

The weight from snow build up on Mýrdalsjökull combined with glacier meltwater, freezing and thawing puts a pressure on Sólheimajökull, cracks it up as its weight pushes it down the valley towards Sólheimasandur and the Atlantic ocean. Crawling glacier was first described by Þórður Vídalin (1687 – 1690). He described how glaciers could crawl forth or retread and how it did not have to do with the changes in season, this might happen in both directions winter and summer.
This crawling might though seem in backwards motion at the moment as the glacier is retreating fast, as the melting and thinning  of the glacier is more and faster than its forward motion and winter build up. The name crawling glacier is first mentioned by Eggert Ólafsson in his book of travel (co written by Bjarni Pálsson ) and is not found in other languages. Eggert was sure that crawling glaciers where only found in Iceland and only in the south and in the east. Now we know that all glaciers move or crawl from under their own weight.

Sólheimajökull is retreating
From 1930 to 1969, the glacier retreated in total around 977 m. Then the weather cooled and the glacier advanced forward about 495 m until 1995, and also thickened by up to 100 m. After that, the glacier started to retreat again and in 2010 it was almost one kilometre further up the valley than in 1930 and was 120 to 150 m thinner than in 1960. Sólheimajökull retreated by 973 meters (0.6 miles) from 2000-2015. In the years 2017 – 2018 the glacier retreated 100m. If the climate continues to warm, there is a possibility that the glaciers will have virtually disappeared in 100 to 200 years. Iceland’s ice caps have waned 6 percent since 1995, with lower glaciers like Solheimajokull, an outlet of the Myrdalsjokull ice cap, shrinking much faster.

Scientists at the Icelandic Meteorological Office claim that Sólheimajökull is a textbook example of how rapidly the melting occurs. Over the last century the glacier lost around 2.2 sq.km. of its front part and it has retreated the equivalent to the size of an Olympic swimming pool annually.

Icelandic glaciers have shrunk by 2,000 square kilometers since the the end of the 19th century when they were at their maximum size since the settlement of Iceland in the ninth century. The glaciers have shrunk by 500 square kilometers since the turn of the 20th century. The result of the receding of the glaciers includes rivers shifting and new glacial lagoons being formed, while other lagoons have disappeared. At the snout of Sólheimajökull the current glacial lagoon formed in 2010 but earlier tales (Eggert Ólafsson 1772) tell of glacial flooding coming from lagoons at the glacier front . With an eruption in the volcano Katla, glacial flooding or Jökulhlaup can emerge from underneath Sólheimajökull and in the last 4000 years over 20 such occurrences have been but only two times since settlement.

Global warming affects glaciers in Iceland
About a hundred years ago,  the Swedish scientist and Nobel laureate  Svante Arrenius commenced his research about global warming and how it might turn into a problem for future generations. Melting glaciers are one of the most visible signs of climate change.in Iceland about 11 billion tons of glacial ice meltsevery year, due to warmer temperatures, caused by changing weather patterns influenced by climate change.

Since 2000, the area of Iceland’s glaciers has reduced by more than 600 km2, and by ca. 2000 km2 from the end of the 19th century when the glaciers reached their maximum extent since the country was settled in the 9th century CE. The glacier area has on average been reduced by ca. 40 km2 annually in recent years. All ice caps in Iceland have been retreating rapidly and losing volume since 1995, but in 2015 the Hofsjökull ice cap in the central highlands displayed positive mass balance. With the melt rate speeding up, Iceland could lose 30 percent of its glacial mass by 2050.

“It is among the highest losses on the Earth,” says pioneering glaciologist Helgi Bjornsson

Glaciers are responsive to climate fluctuations
Dynamic in nature, these glaciers are responsive to climate fluctuations and affect their environment profoundly. Also, they lie over active volcanoes; these induce jökulhlaups that can threaten areas of habitation. The glacier melt releases the pressure from the ice on the underlying rocks which may lead to more frequent volcanic eruptions in the future. The country’s glaciers feed its largest rivers and currently provide at least one-third of its total runoff. Since a general glacier recession set in at the end of the 19th century, the largest icecap, Vatnajökull, has decreased by about 10% in volume (300 km3), contributing 1 mm to the concurrent rise in sea level.

The danger of Sólheimajökull
The edge of Sólheimajökul looks innocent with the black ash from Eyjafjallajökull and Volcano Katla covering some part of it. Entering the snout and ice caves, which sometimes are created at the edge of the glacier tongue is hasardous, and those who attempt it should be aware, that the ice is constantly moving and parts of the front as well as ceilings of ice caves collapse frequently! Do not risk your life by going up on the Ice with out proper gear and/or preferably with a local glacier guide.
Previous
Next