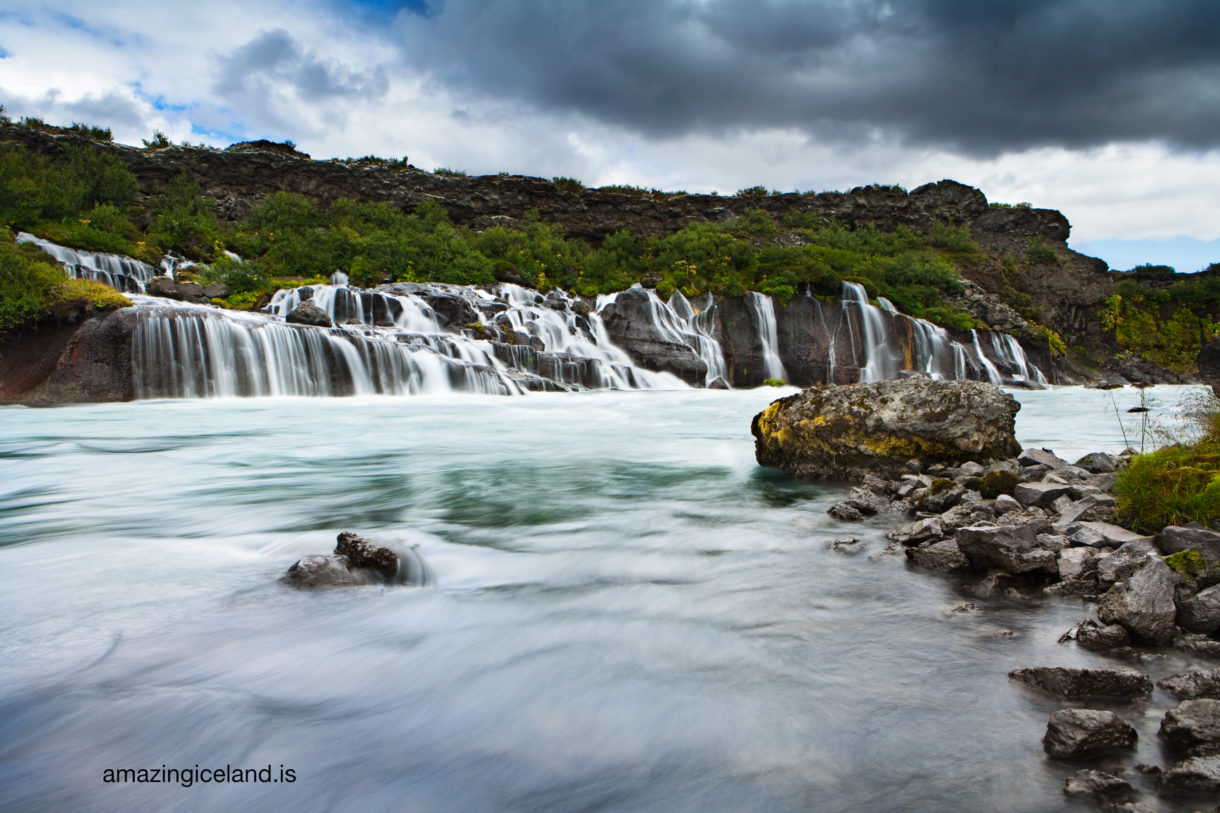 Waterfalls flowing from underneath lava

Hraunfossar (lava falls) is the name of a 1 km row of beautiful little waterfalls that flow from underneath Hallmundarhraun lava and into the river Hvítá at a point called Gráhraun or Gray lava.

From the viewing platform by Hvítá there is a good view across Hraunfossar, and it is possible to see both how the water comes from beneath the lava and the impermeable clay layer that the water flows off it.

How are Hraunfossar formed?

The waterfalls themselves are formed by groundwater flowing from underneath the lava. Due to the fact that Hallmundarhraun is new and fresh lava, all the water descends and seeps through the lava and consequently there are no rivers on the surface of the lava. Under the porous lava, however, there are older and denser soil layers. Precipitation that falls on Hallmundarhraun flows there for relatively shallow under the lava on a dense strata. As Hvítá that carries 20 times the flow of the Hraunfossar waterfalls, flows outside of Hallmundarhraun below Barnafoss, she has dug down far below the lava and the dense soil below it. For this reason, the groundwater flows from the lava in a long section and falls into river Hvítá in Hraunfossar waterfalls. Although the waterfalls are unique, it is most likely that the groundwater flow is just as high elsewhere, but because the river eroded below the level of the lava into the underlying impermeable rocks, the waterfalls emerge from underneath the porous layer of lava.

How was the lava Hallmundarhraun created?

In the early part of the 10th century there was a great volcanic eruption in the craters beside and below the edge of the glacier Langjökull, the second largest glacier in Iceland. From these craters the lava called Hallmundarhraun ran, it is the largest lavaflow of Borgarfjördur in modern times. The lava flowed 50km westwards from the crater, north of Eiríksjökull glacier and Mt Strútur and all the way to Hvítá’s current river at Hraunfossar.

The volcanic eruption has probably been protracted, possibly for a continuous period of several years, and the lava flow flowed about 50 km west of the craters, north of the glacier Eiríksjökull and Mt. Strútur, and up to the current bank of river Hvítá where Hraunfossar waterfalls are.

It is impossible to predict Hvítaár’s route before the lava flows, but the river has probably switched very quickly to the outer edge of the lava after it stopped flowing.

Above the waterfalls Hraunfossar is an area with small waterfalls or floods in the river Hvítá, these are called Barnafoss or children falls. There, Hvítá falls out of the lava, slowly digging itself into the soft lava rim and forming a shallow canyon.

At Barnafoss there have been found rock arches over the river, but the rock arches are formed at the bottom of the river in the lava gorge where the river digs through. This carving is at its highest during flooding of the river when it flows over its banks as can clearly be seen in the surroundings of Barnafossar waterfalls.

The name Barnafoss or children falls is said to come from a folklore of children going out on one of the stone arch over the river and falling in. After the incident the mother broke down the arch so no other children would be harmed.

There is a viewpoint right from the car park that provides you with the most amazing view over the waterfall, river and the birch surrounding. The pedestrian bridge across the river was originally built in 1891 and renovated exactly a century later. The waterfalls have been protected as a National Monument since the year 1987.

Where are Hraunfossar located?

The waterfalls are located in Borgarfjörður the West part of Iceland about 118,5 km away from Reykjavík.

What else to see near Hraunfossar

In the early part of the 10th century there was a great volcanic eruption in the craters beside and below the edge of the glacier Langjökull, the second largest glacier in Iceland.

From these craters the lava called Hallmundarhraun ran, it is the largest lavaflow of Borgarfjördur in modern times.