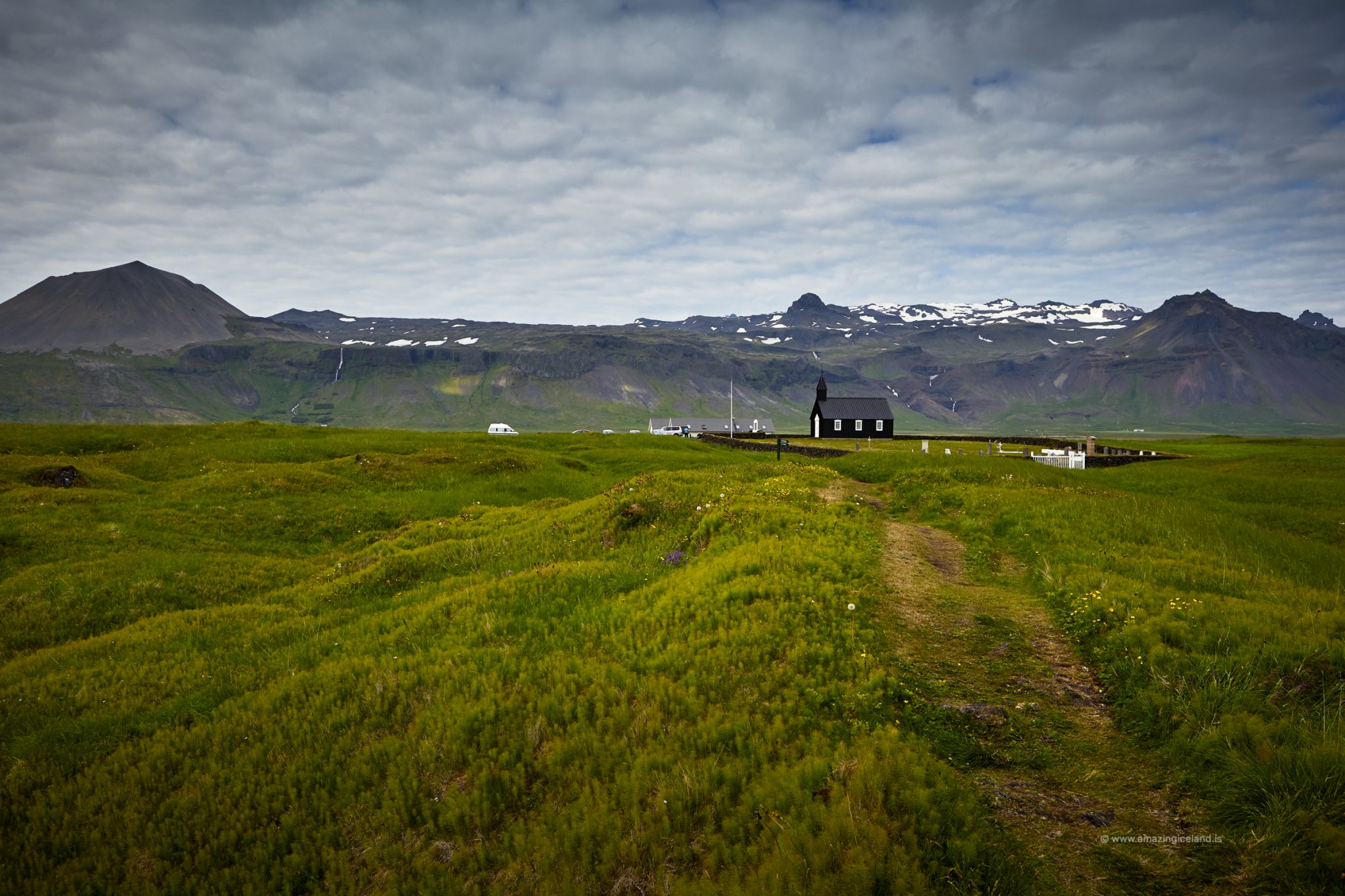 Black church at Budir in Snæfellsnes

“..rebuilt with out the assistance of the holy fathers..”

Búðahraun lavafield with its rounded crater Búðarklettur creates an interesting setting for the black church at Budir and the fine Hotel Budir situated in Budavik.
Originally the main function of Búðir was that to act as a commercial and trade hub for Snæfellsnes and the surrounding west coast region, during an extended period of Danish trade monopoly. Today the small hamlet of Búðir along with Hótel Búðir is a center of attraction in Snæfellsnes for tourists and various tourism activities.

The lava field is known for its beauty in its roughness and the diversity of plant life. The surrounding mountains cater for a spectacular view as one hikes through the field on old paths that hooves of horses have marked into the lava as they carried heavy load of fish to be exported from Frambúðir, the original Budir that gave the name to this area. The community moved to current location after a very destructive sea-flood in 1799 called Básendaflóð. In Budahraun you can find amongst other plants Leptosporangiate ferns (Pteridopsida)

Even though there are no apparent signs seen on the coast line that  indicate the lava of Budahraun having flowed into the ocean, it is most likely that it flowed in an eruption dating 5000 – 8000 years back.

All that remains of Budir’s former community is the black wooden church Búðakirkja.  Bent Lauridtsen retained a bishop’s permit from Jón Vídalín in 1701 to build a church in the area but decision on where it would stand was difficult to make. According to local tail, an elderly woman suggested that a man would spin in circles until he became dazed and confused upon which he then would shoot three arrows into the air and should one of them be specially marked. Where ever the marked arrow would land, that would be the place where the church should be built.

A small turf chapel was built in 1703, where it stood until it was dismissed by orders of the Danish King Christian VIII in 1816. Several residents fought for the reclamation of the church but it was not until in 1847 and issued at that the priest’s council in Reykjavik in 1949 that allowed for the construction of a new house of worship—as long as the residents of Budir would fully finance the project and see to its maintenance.

A man named Guðmundur tried for a long time to get the church re inaugurated and after his death, his widow, a woman named Steinunn had meticulously cared for the artefacts from the old chapel, which resulted in the church still donning some of its original items, such a door latch engraved by Bent in 1703. She had the door latched engraved on the back that this church was re inaugurated and rebuilt with out the assistance of the holy fathers. Renovations were made in 1951, and again in 1984 – 1986 when it got slightly relocated and reconstructed according to its original Danish design. The last renovation of the church was made in 2010 and it is now periodically maintained and stands proud for all the visitors that come each year.

Hotel Budir ( hótel Búðir in Icelandic) is undoubtedly one of the most beautiful countryside hotels in Iceland, just a short drive from Iceland’s capital city, Reykjavík. The hotel sits in a lava field on the westernmost tip of the Snæfellsnes peninsula, in the western region of Iceland.

Due to the hotel´s location, guests have an impressive view of the breathtaking Snæfellsjökull glacier and the Budir-estuary which meanders into the vast Faxafloi-Bay where a number of seals reside.

Originally the main function of Búðir was that to act as a commercial and trade hub for Snæfellsnes and the surrounding west coast region, during an extended period of Danish trade monopoly.